For me, the entrée wasn’t simply the first room we entered, it was the first room we fell in love with.  In hindsight, I saw right through the tired finishes as the house spoke to me in the special way they do when someone who sees and hears what is unseen or spoken enters its sanctum.  I immediately ‘saw’ what this room wanted to be the first time I walked through the front doors – and I can happily say, the resulting space is exactly that.

This one of the beautiful original mouldings

This was but a small amount of plaster needing repair

This light fixture was re-purposed in Salle de Bain 1

From the impressive entry doors and awning, to the elegant wood staircase and striking architectural features, it’s easy to see how this entrée stole our hearts!

The entry doors and canopy were weathered and the glass covering the canopy was old, not to code and was broken, so would need to be replaced for safety as well as aesthetics.  As you can see in these pictures, the house is beautiful, but in great need of attention that would include repairs, stripping of old finishes, replacement of glass to the awning, and attention to the existing landscaping.  The metalwork was strong, but again, needed old finishes cleaned away to allow new paint. 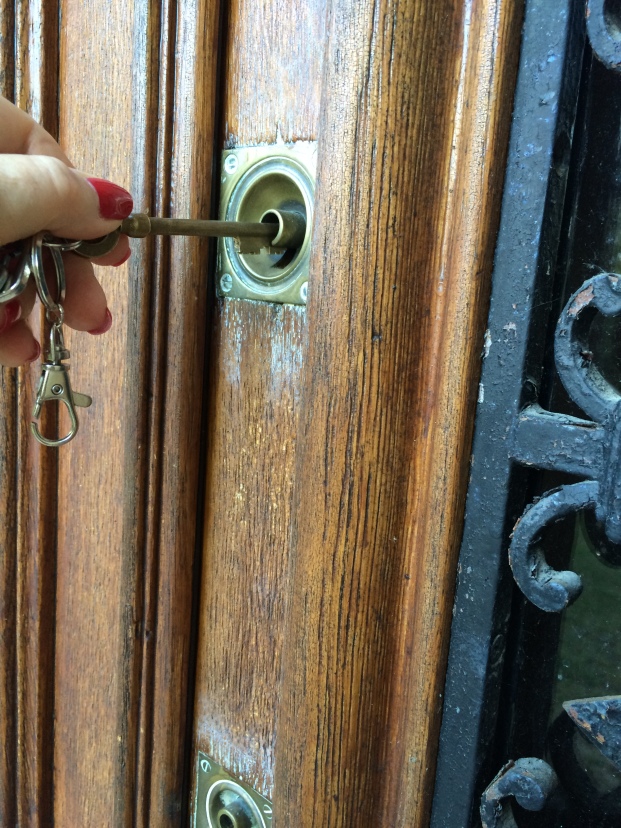 The first order of business would be to completely remove all existing electrical since it was deemed unsafe – so all new systems were designed and installed to bring this beauty of a house into the 21st century.  Note the sizable electrical panels on the left and the new plumbing chase on the right.  The house now boasts over 50 recessed LED lights, 7 new wall sconces, and 9 chandeliers – two of which are vintage French – a security system, video intercom on all three floors, and excellent Wi-Fi throughout.  Definitely now in the 21st century!

New electrical was the first order of business – you see the impressive electrical panel to the left of the door that will require its own closet to be built.

The walls were also in need of serious intervention.  When we originally visited the house, we thought the wallpaper could be painted over, as is typically done, but after suffering yet another winter season, the damp and cold had taken its toll.  The wallpaper was now separating from the limestone block walls and needed to be completely removed.  This picture shows what this looked like before removal –

The next order of business would be to address the floors.  Since the wood floors were in very poor condition, and we felt from the moment we saw the house the floors needed to be tile, we removed the wood planks and prepared the floor to receive cement tiles, which are precisely the type of material that would have been installed originally if wood had not been used.  The problem we would encounter here was relative to floor heights, tile thickness and adjacent tile floor heights.  Cement tiles are very thick, so in order to align floor heights, after removing the wood planks, we would need to cut down the supporting beams a few centimeters to accommodate the new subfloor and concrete slab required for all tile installation.  Not a small task, but not a terribly complicated one either – just more money! 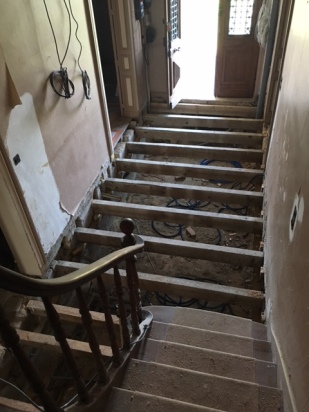 After removal of the entry floor boards 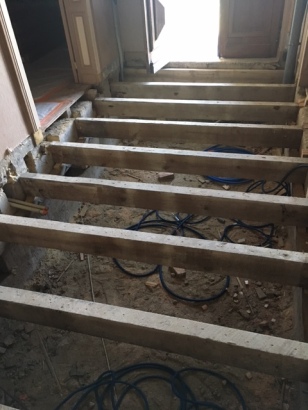 Once these beams had been cut down, subfloor, then a concrete slab was poured and cement tiles were laid.

The doors were stunning and would only become more beautiful through their restoration – and this truly is the moment I fully realized we were ‘restoring’ this house, not simply renovating.  In addition to stripping of old finish and repairing damage, we discovered most of the door panels had split from years of use, dryness, etc., so the solution was to add a thin layer of MDF board at each panel on both sides of the center panets to permanently repair them from further splitting and damage.  We had this done to all doors on the ground floor but opted not to on the first floor – where many small cracks have opened back up.  Penny wise, pound foolish, because eventually we’ll need to mitigate all the doors on the first floor as well.  Here is the before and after of the doors:

Doors and entries full of potential 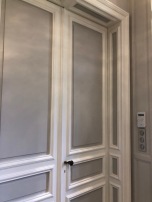 There really wasn’t a surface that did not need to be touched.  The ceilings needed significant restoration – after minor initial repairs, we were disheartened when a week before painting was to commence, we received a call the plaster had begun crumbling and falling off the lathe.  These pictures were sent to us by the contractor after his pre-painting visit: 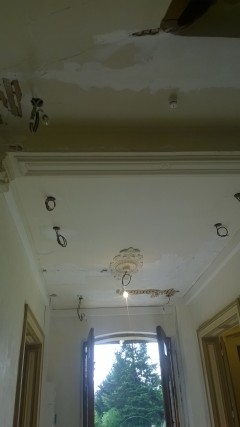 These are but a few of the pictures outlining this last minute issue.  The plaster man was immediately dispatched and the ceilings were restored with the original mouldings remaining intact.

One of the issues many renovating or restoring homes of this age is the lack of storage and auxiliary space, so when new plumbing and electrical systems are added, there is often a need to find a location where plumbing chases and electrical closets can be accommodated.  In this house, these systems were added at the front of the entry, just to the left and right of the entry doors.  You will notice in the above photo’s the electrical closet is now to the left of the door as you exit the house and on the right is a plumbing chase, which allowed us to have a toilet added to Salle de Bain 1, which is directly above the salon on the ground floor.  This is also a very convenient and central location for the electrical access, as well as the Wi-Fi connections.

One of the finishing details would be to add a set of crown moulding to conceal the extensive wire bundle from all this new electrical work that was now running the perimeter of the entry on its way to the new electrical panel.  With houses of this age constructed of limestone block, the interior walls are often, thick limestone block, so burying wires inside the walls and ceiling plenums is not usually an option.  With the assistance of the painter, we selected a crown moulding that not only fit the proportion of the existing mouldings, but had a large enough space behind it to conceal this wire bundle.  The resulting look is very complete and if I didn’t point it out to you, it would not occur to you it hadn’t been there all along.  And really, that was our goal.

This one of the beautiful original mouldings 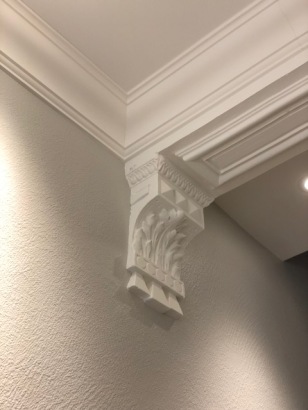 Here, we have preserved the original moulding bracket and added crown, which conceals the wire bundle and adds a nice finishing detail to the ceiling line.

The beauty of this house, the age of this house, demanded respect.  I am greatly bothered and disheartened when I see architecture broken down either in an effort to modernize, or because there is lack of respect for what it represents.  It was our intention to maintain everything possible – especially with the entry, stairs and first floor entry, so when we researched new finishes, the impetus was to find materials that would make the finished space appear as though everything was original to the house – right down to the chandeliers.  In reality, the finishes would have more likely included wallpaper, and there would have been no recessed light fixtures, but the overall sense of the space is fresh and elegant – and definitely French, late 1800’s.  So, without further adieu – here are the after photo’s – 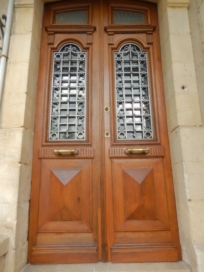 Here is the newly restored canopy over the front door after restoration. 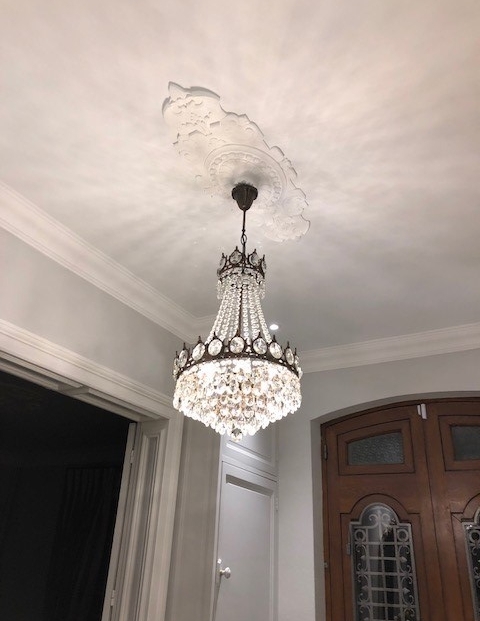 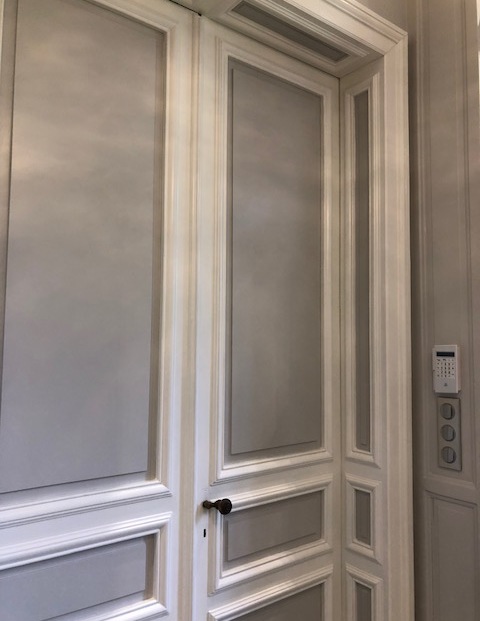 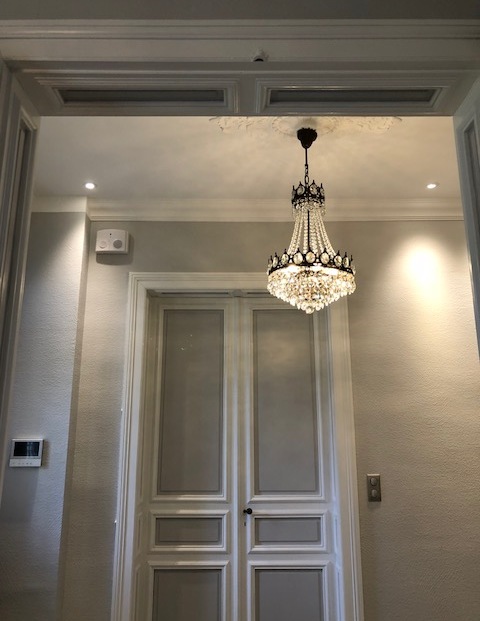 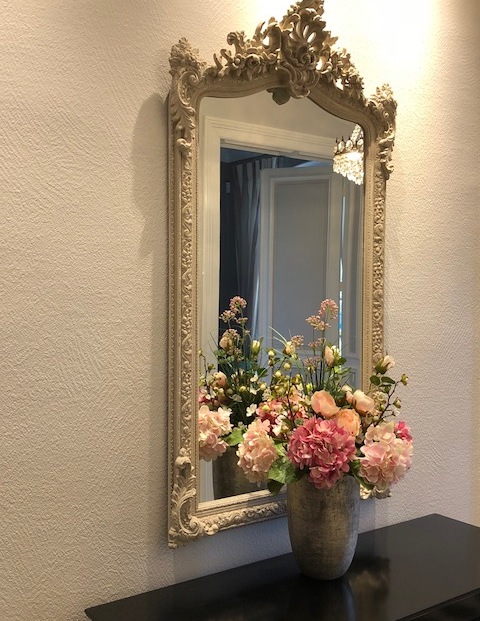 In the end, we are very pleased we took the time and  effort needed to do proper service to the entrée – after all, you only get one first impression, so it ought to be grand!