Upon first entering the salon of the house we were met with a small yet mighty space – original parquet, elegant mouldings, ceiling medallion, fireplace, and a beautiful window.  The space was tired and old, rich with potential, and small – barely ten feet wide!  The proportions were odd – not wide enough to seat around the fireplace, yet we knew it would be the perfect room for a couple of small seating areas for watching television or quietly reading a book or having a coffee near the window. 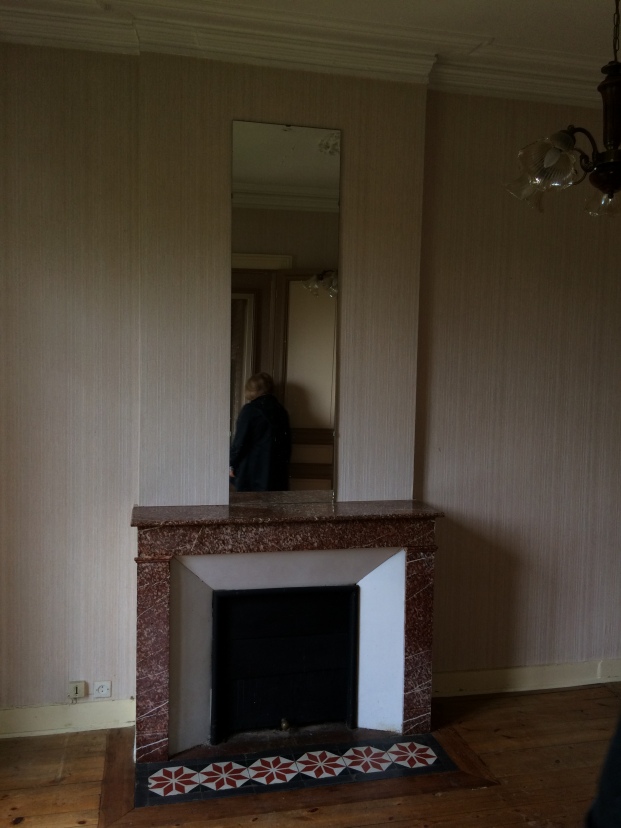 Below you see the room before renovation, starting with the wall to the right of the fireplace,  the next picture shows the end wall before the door was added to reclaim every possible inch of storage, and the last two frames show the remainder of the room and the double doors into the entrée.  The last frame shows the floor board added when the two rooms were made into one.  We needed to remove this floor board and replace it with one that would fit more cleanly. 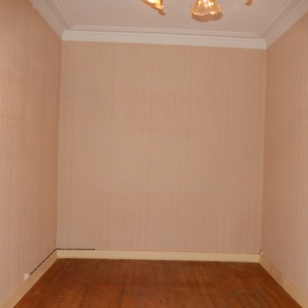 Aside from insect damage, these are the types of issues with the floor that needed resolution.

As we were accessing the width, or lack thereof, we quickly noticed something did not add up – the length of the room seemed oddly short in contrast to the front to back dimensions of the house.  A bit of investigating revealed a wall that had been erected, presumably when the heating system was added.  Instead of working the ventilation of the cave for the furnace so that it would remain in the cave – a significant part of the room was removed, so in the place of what had been two rooms off of the entrée, the wall between the two rooms was removed and the remainder of the room at the rear side of the house was added to the room at the front.  Given the fact houses of this era were short on storage, we determined the cave could be contained in a smaller space and a door could be added to allow a good sized auxiliary storage room.

The photo on the left shows a view inside this space after the door opening was cut into the wall.  You can see the new floor beams added and the vent pipe that we had relocated.  Sadly, I had better photo’s of this process and they have been lost in the shuffle. The view on the right shows the finished wall with the elevated door.  It’s a step up, but still maintains an eight foot ceiling – plenty of room for storage shelves, wine storage, linens, and a additional refrigerator.  It is our intention to add a wall curtain to completely conceal the door so when we are away and the house is rented, no one will be the wiser there is another room.  (Unless they read this blog, I suppose!) 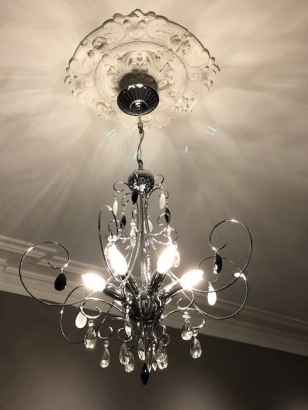 As you see here, there is a lovely ceiling medallion that is barely noticed – on the right, after restoration of the ceiling and a new chandelier, it now gets all the attention it deserves.  The chandelier selected is somewhat contemporary and ‘lighter’ scale so as not to overwhelm the space.  Additional recessed lighting was added near the walls to illuminate them, further enhancing the lighter feel of the room.

The after photo’s below show two seating areas – one for a cozy area to watch some television and the other at the beautiful window to either read or enjoy a glass of wine or cup of coffee.  We selected a rich grey tone for the walls in this room to render a cozy, quiet feel despite it’s already intimate scale.  Because the room is narrow, we opted for a couple of ottoman cushions in lieu of a sofa table that would have crowded the space between the sofa and television stand.