Although the official closing of the documents was on September 9th, of the year 2016, the actual start of construction was not until January 31st, 2017.  After the glow and excitement of the closing in September, with blueprints in hand, we naively thought all those with signed contracts and checks in hand would immediately pounce on the property – unlike the story, “A Year in Provence” by Peter Mayle, our contractors would show up and remain in place until the project was completed, or so we hoped.  October came and went, November came and went, as did December and January.  What I discovered when I returned on the 28th of January was all of the individual contractors wanted to meet with me once again and verify the drawings, scope of work, etc.  You see, we had hired contractors who were, as the French say, ‘very serious’ with regard to their work and wanted to ensure all ‘T’s’ were crossed and ‘I’s’ dotted.  No work could happen until they were absolutely certain – so we met.  The day I arrived, I had all I could do, bleary eyed from many hours of travel to meet with three of these contractors at the same time.  Thank goodness for our friend and ally Pascal who did his best to ensure they understood my terrible French as I explained the best I could, leaning heavily on my blueprints for clarification of our intent.  We went through the house with a fine toothed comb from bottom to top until every last question was answered to their satisfaction.  That was a Saturday.  I could now settle in at the Chateau where I was staying and relax a bit until Monday.  That arrival day was a blur with muddling through meetings, then joining my hosts in the kitchen to ready for a dinner party I was also invited.  It was a glorious evening of fabulous wine, food, laughter, and observation of the way of the French.  While my heritage is French and Scot-English, it is the French I resonate with the most, yet have so much more to learn.  By midnight, I fell into bed and slept until I could sleep no more.

Sunday was a day to organize my files, thoughts, spend time at the house and assemble two chandeliers I had brought from the US – and yes, they were 220 voltage wiring.  Since they had been less expensive to ship to me in the United States than to France, I reasoned I could ship them for less than the more than $400 requested. Packed and ready to go, we were astounded to learn it would cost more than a whopping $900 – to my dismay I sought other solutions.  First I contacted the airline who would gladly accept the box (within their size and weight standards) as an additional piece of luggage.  My concern then was the fact I was traveling alone and the box was rather unwieldy – my friend Pam asked if the items would fit in a rolling suitcase…well, disassembled they did!  So two chandeliers in partial assemblage were neatly packed into a rather large rolling suitcase for their journey to France.

Monday, the 31st, came quickly and by the time I arrived a little before 9:30, this is what I saw:

Demolition had begun!  For better or for worse, the chapter had begun.  This is what the evacuation chutes looked like from the inside: 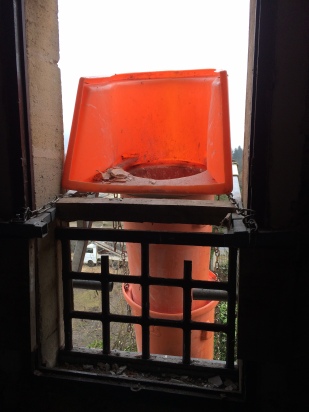 This chute was used to dispose of demolition material. 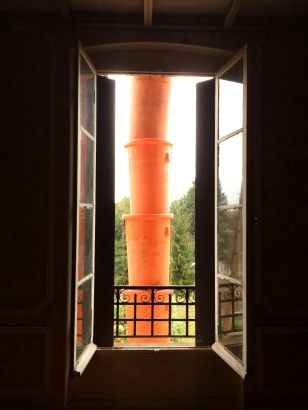 For the purposes of this chapter, I’m going to focus on the second floor demolition – DeuxiemeEtage. To fully understand the potential of this floor, we needed to completely gut, ie: demolish the space to the structure…which we did.  What follows are photos of the before and demolition, new framing, then finished spaces. 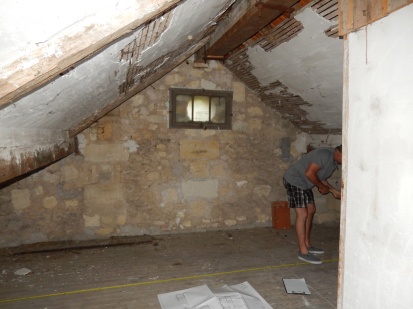 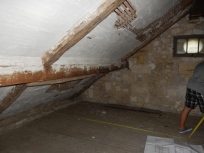 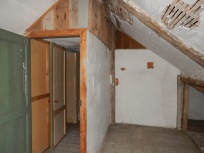 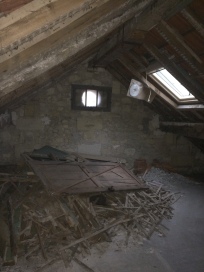 This is the view out the front dormer window on the second floor after rough demolition – upon seeing this, I decided to also remove the flat section of ceiling framing over the window to open it more with a gabled shape rather than flat. I then also decided to raise the ceiling height on this side of the cross beam to further open the ceiling.

Before photo of Salle de bain 2 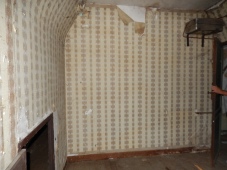 Over 290 square feet of living space was recovered from behind these walls.

As you will see with the before and demolition pictures, there was an enormous amount of square meters underutilized – roughly 30 meters square, which is just over 290 square feet of living space!  In addition, other than a new roof being done roughly 14-15 years prior, no other work had been done to this space.  The rooms were very rudimentary and basic, the finished floor was riddled with dry rot, there was no plumbing, and very little light.  Only the small window on the front of the house and the small round eave window provided the scant amount of light for the entire space.  By adding three skylights to the back side of the roofline, we were able to exponentially increase the light in this space – and as we discovered, it was the key ingredient to breathing life back into the rooms.  What began as dark, oppressive space has become light, warm and inviting.  You can also see the surprise of the hornets nest we found behind the walls!  Once fully exposed, we were able to see any areas needing attention or additional support, then fully insulated prior to closing in new walls.  The new subfloor was then covered with a beautiful, rustic laminated vinyl wide plank floor which compliments the stone features perfectly.

One thing we loved about this space were the beautiful beams and stone features which we left exposed where possible to render this floor of the house an entirely different ambiance.  The result was a much more rustic, cozy and eclectic feel in contrast to the very traditional and elegant main house.  In the end we ended up with a master suite separated from a large salon and office area where we can retreat when there is a houseful of guests.

Still a way to go, but you can see one skylight in the distance on the right and the other newly framed in the foreground.

New skylight over the stairwell with entrance to master suite beyond.

This is the bonus space on the second floor after the exterior walls have been insulated, knee walls built with storage enclosures, then plastered.

This is the right side of the bonus room where it will be fully wired for wifi, cable, etc. to become a comfortable sitting area to read or watch tv. Each side of the room will have a storage area under the eaves to store less commonly used items when not needed.

We added knee walls to the area now known as the salon which provided storage accessed through small ports on opposite sides.  We also added built-in shelves for books, games, dvd’s, and office storage.

During the framing of the new spaces, we discovered a few restrictions with the center roof framing.  Originally we intended to have separate doors leading to the Salle de Bain 2 and the Chambre 4 with the open Salon and office at the top of the stairs.  In order to execute the two separate doors, we would have needed to lose significant space in the Salle de Bain for the door clearances due to the ceiling slopes, so ended up with one door into both – resulting in a spectacular master suite.  What began as bonus space and what we had considered less desirable space has become the jewel of the house – a wonderful master suite.  Even with a house full of guests, we can retreat to the second floor and relax.

Where there was a wall is now open and inviting. 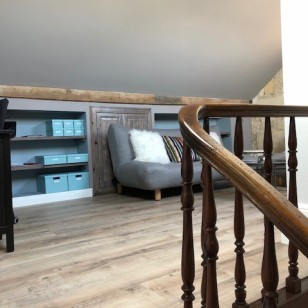 View at the top of the stairs.

The new seating area with sofas that double as extra sleeping space which allows for up to ten overnight guests in a pinch.

Opposite view of salon. 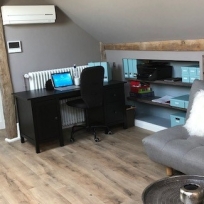 The office is nicely tucked on the opposite side of the room.

Master Suite Tub with a view

Master Chambre. The window beyond had been nearly lost in its dark recess. 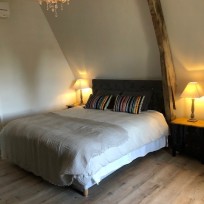 View looking towards bathroom and entrance. 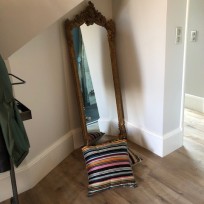 Next up: Premiere Etage Chambres