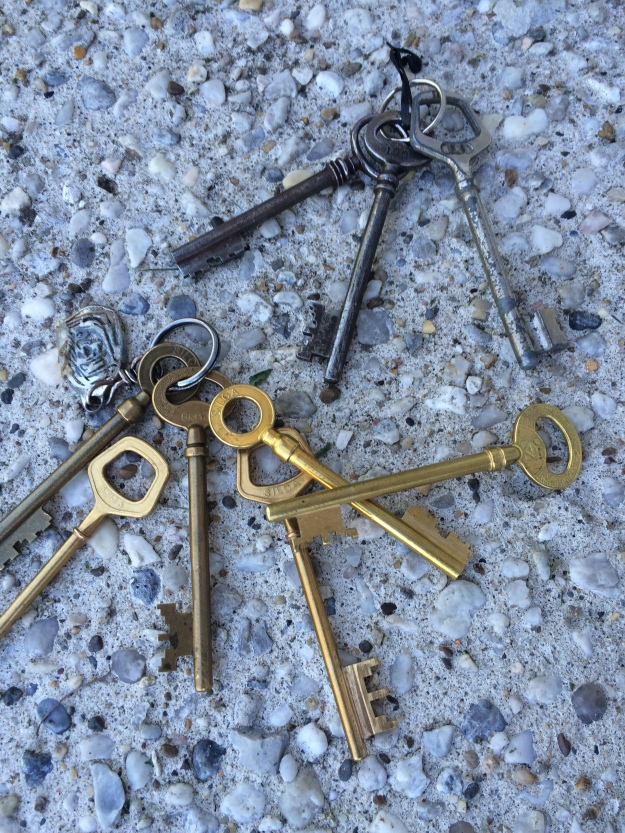 These were just a few of the many keys.

Our new task would be one of the biggest we’d ever undertaken and that would be to renovate this beautiful stately manor and return it to its former glory.  LaRoseraie was a late 18th century art nouveau maison de maître.  Translated, we had just bought the ‘Rose Garden in the Holy Land’.  No pressure here.

We immediately busied ourselves with sketches, measurements, photographs, and more measurements so after returning to the United States we could sort out the fullest potential of this place.  During our first visit to the area, we had the good fortune to stay at the Chateau de Courtebotte in Saint Jean de Blaignac where we met two people who played an enormous part in helping to make this a reality.  The support, wisdom and guidance of both Isabelle and Pascal Jehanno, owners of the Chateau have been instrumental in our being able to renovate this property.  With their assistance, we met with carpenters, plumbers, electricians, and painters who would, in turn, lead us to other contractors for additional work in smaller areas.  If you ever come to the Saint Emilion area and need a place to stay, look no further than Chateau de Courtebotte.

Contractors in France are not the same as they are in the United States.  You will wait a while – sometimes weeks, for a quote.  Once you’ve signed a quote and returned it with a deposit, it may be weeks or months before the work commences.  The process will be different, the responsibilities of each contractor may be different – but overall, I’ve met and worked with some of the most talented artisans who (when they show up) will likely be whistling or singing their way through their day.  I’ve come to respect their dedication, their work ethic, their talents, their pride in what they do, and in a few cases, their friendship.  It was, at times, a hard fought battle, but in the end I’d do it again to have walked away with the experience of a lifetime.  As owners of an architectural and interior design firm in the United States, we had the confidence and skills necessary to act as our own general contractor, but I’m not sure they were all prepared for us!  I’d like to think they learned a little bit too as we swapped information about the differing construction practices.

As many of you already know, in France, the levels of a house are named differently.  The ground or main floor is what we call the first floor, yet in France it is the rez-de-chaussee, the floor we call the second floor is called the first floor or ‘premiere etage’, and the second floor in America would be the ‘deux etage’ in France. Most people learn this when the rent a room or apartment for the first time and realize that third floor room or apartment is really  on the fourth floor.  I still have not figured out why.

The room names are:

LaRoseraie has a ground floor or ‘rez-de-chaussee’, a premiere etage, and a deuxieme etage.  The deuxieme etage (second floor France/third floor American) and technically was bonus space for us.  The ground floor is the typical maître de maison layout – a central entrée with four large rooms off of it.  Over the years, these four rooms became three so the layout was a main entrée with a salon on the left, salle a manger on the right front and cuisine on the right rear.  The premiere etage had an entrée with two large chambres (bedrooms) on the left and another chambre on the right with a large salle de bain (bathroom). Presumably, the room now designated salle de bain was once a fourth bedroom/chambre.  Second floor (deuxieme etage), the bonus space held two more bedrooms and a large storage area – this was to become a master suite with an office and second salon.